A snapshot of our week:

Reception are continuing to read ‘The Magic Paintbrush’ by Julia Donaldson. The text contains lots of rhyming verse. The children have enjoyed identifying rhyming words and writing their own. In the story, Shen has been thrown into prison by the Emperor. We have had some lively discussions about what Shen might paint with the Magic Paintbrush to help her escape. In maths we have explored capacity and measuring. The children predicted how many scoops of soil it would take to fill different size plant pots. We discovered how many small things can fit into a matchbox and followed a recipe for perfect playdough.

Year 1 have been super imaginative this week! We absolutely loved bringing in our special toys/objects and sharing with the class why they are precious to us. We then wrote stories about losing them that had a beginning, a middle and a happy ending. We felt very proud of ourselves for working our socks off! In maths we’ve been exploring lots of different ways to subtract from teen numbers including using tens frames, number lines and mental methods too. Check out the home learning project which we’ve set on tapestry where we want you to make a video of a weather report, and don’t forget to play on Numbots little and often. Year 2 won the number bonds competition in assembly and we want to beat them next time!

Year 2 have had another great week! In Literacy this week, we planned and wrote a non-chronological report about the Great Fire of London, where we included some interesting facts about life in 1666 such as, the clothes they wore, the food they ate and the tools they had to put out fires. To finish our book, we did a recreation of the Great Fire under Mr. Chris’ supervision, and we were able to burn down some houses while singing “London’s burning”. We did try to put out the fire, but just as in 1666, we didn’t have the right tools.  In Maths, we have started to develop the concept of division both by sharing and grouping using number lines. We have used our making links tool to understand the relationship between multiplication and division.  In Science, we were looking at plants that we eat and we were surprised to find out that we consume different parts for instance, the roots, stems, leaves and even the fruits. Maybe at home look at the vegetables and fruits that you have, and discuss what part of the plant they come from.

Year 3 have been learning all about money but many children still need to practice giving change. Please take your child shopping this weekend, see if they can find the correct notes and coins to buy something, many children are finding giving change really tricky. We have set up our own shops in Y3B and used real money, it’s been great fun! We have also learnt more about rainforests and been checking on our plant investigations. We have met some real scientists on zoom too!! Our book ‘The Tin Forest’ is coming to an end and we have special trip planned for the afternoon of February 9th to make our own Tin Forest in Sydenham Woods. We need lots of Parent helpers, more details to follow!!

Year 4 have been tackling some really tricky division problems in maths this week. We have all applied our perseverance tool and used our multiplication knowledge to answer questions. In Literacy, we started our new class book ‘The Mermaid Of Zennor’ which is set in the village of Zennor, on the rugged Cornish coast, where the land meets the sea. There are stories and whispers of a villager capturing the heart of a mysterious and beautiful stranger from the sea … a mermaid! We have been using our empathy goggles to write dairies as the main character- Zachy. Next week Year 4 will be planning their own Cornish folk tales.  In guided reading, we have continued our half term of poetry and used our collaboration tools to memorise, recite and perform the amazing poem ‘Jackdaw’ which fuses rap, rhythm and rhyme to captivate the audience as well as other poetic features.

Year 5 have been using the subjunctive tone and modal verbs to write very persuasive emails to the Officer Smythe, lead detective in our text High Rise Mystery. We have conquered our understanding of fractions; adding fractions and converting them to mixed numbers, as well as adding 3 or more fractions! In geography & history we have been using maps to help us identify Anglo Saxon burial grounds. In RE we have been thinking about Temptation. A sweet was left on each table and everyone resisted the temptation, Father Tomos came to talk about how his religion gives him inner strength to avoid temptation. Year 5 children were able to share how their own beliefs guide them to make good choices.

Year 6 had the opportunity to have an exciting zoom call with Tom Palmer, the author of our reading book ‘After the War’. We thought about what burning questions we wanted to ask him, in turn he gave us useful advice on how to progress as writers. In literacy, we have been writing newspaper reports around the discovery of Anne Frank’s Diary and the decision of Otto Frank (Anne’s father) to publish it. Yesterday (27th January) was Holocaust Memorial Day, where we remembered those who lost their lives at the hands of Nazi Germany. We created posters celebrating the event, using the Holocaust Flame and key information learnt about that day.

Well done to the children in Upper Key Stage 2 who represented Dulwich Wood at the Netball tournament, the first team made it right through to the final!!

Dates for the Diary

Emu Club and Breakfast Club bookings for after the half term break are now available to book on SchoolsBuddy. Please be aware that we are unable to swap/cancel bookings.

Please support NSPCC Numbers day by sending in number related cakes and biscuits next Friday. Children can bring £1 and all proceeds go to NSPCC 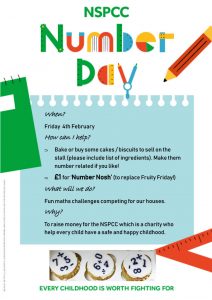 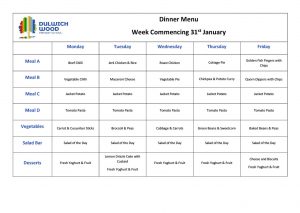